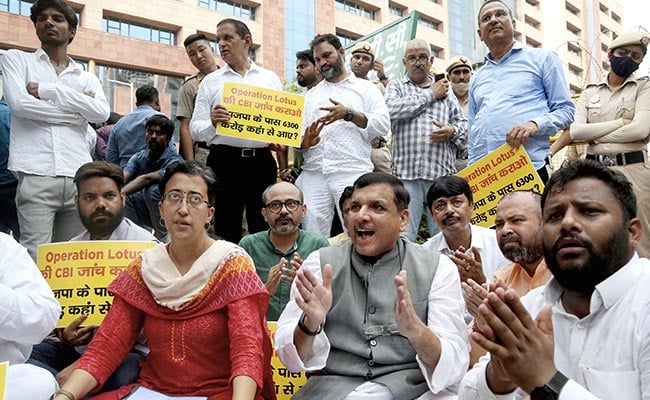 A delegation of the Aam Aadmi Party (AAP) sat on a dharna outside the CBI headquarters here on Wednesday after it went to meet agency director Subodh Kumar Jaiswal to demand a probe into alleged attempts to topple non-BJP government but was not allowed entry.

The AAP had earlier in the day said it would meet Mr Jaiswal to demand a probe into the alleged attempts to unseat non-BJP governments in various states by the BJP by poaching legislators under ‘Operation Lotus’.

The 10-member delegation of AAP MLAs reached the CBI headquarters to meet its director at 3 pm even though his office had not given any response to their request for the meeting.

“This proves that the CBI functions at the behest of the BJP… I had also requested an appointment with the CBI director but I am yet to get any response,” AAP Rajya Sabha MP Sanjay Singh told reporters after he joined the protest outside the agency headquarters.

Mr Singh termed as unfortunate the CBI’s refusal to allow AAP legislators to meet the agency director and lodge a complaint, saying even an ordinary police station receives complaints from the people when they reach there.

“But here, elected MLAs of Delhi who want to lodge a complaint against the BJP’s Operation Lotus in Delhi have been made to stand outside the CBI headquarters for an hour,” he charged.

“The CBI must probe the toppling of governments by the BJP and ascertain the source of the money being used for buying MLAs under Operation Lotus,” he demanded.

MLA Atishi, who was part of the 10-member delegation, said the party had earlier sent an e-mail to the Jaiswal’s office seeking an appointment with him but it was yet to get a response.

“We have come here and are demanding that time be given to us (to meet the CBI director) because ‘Operation Lotus’ is a very important issue. The BJP has spent Rs 6,300 crore on ‘Operation Lotus’. Hence, a CBI investigation should be conducted (into the matter) and the source of this money should be ascertained,” Atishi told reporters.

“We are hopeful of being allotted time,” she added.

The BJP has denied the allegations and demanded that AAP MLAs who claimed that they have been approached by the BJP and offered up to Rs 20 crore to switch sides should undergo a lie detector test.

Delhi’s Deputy Chief Minister Manish Sisodia had accused the BJP of trying to poach AAP MLAs and topple the Kejriwal government after the CBI raids against him in the alleged excise scam.

Earlier in the day, Atishi said whenever the BJP loses assembly elections in any state, its ‘Operation Lotus’ begins with the use of the CBI and the Enforcement Directorate (ED) to corner the state government.

Thereafter, the ruling party MLAs are offered money and promised that cases against them will be withdrawn if they join the BJP, she alleged.