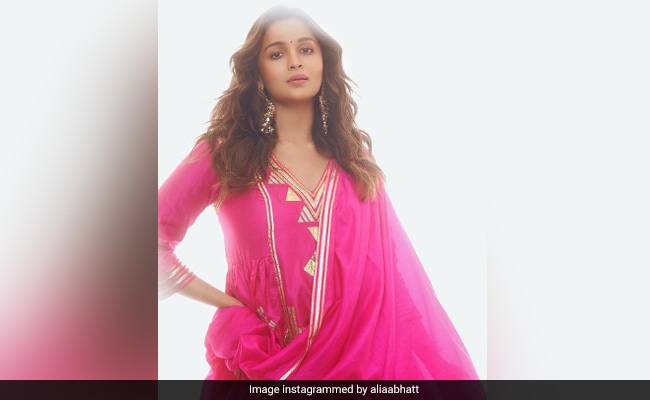 Mother-to-be Alia Bhatt, who is all set for the release of her upcoming film Brahmastra, shared a few pictures on social media from the film’s pre-release event in Hyderabad. On Saturday, Alia Bhatt shared a set of pictures of herself on Instagram. Her caption read, “6 Days To Go. 9th September – Brahmastra” with heart and fire emojis. In the pictures, Alia can be seen wearing a pink Indian outfit. Her outfit had a special message on it, “Baby-On-Board.” This was her look for Brahmastra‘s pre-release event that took place on Friday in Hyderabad.

Team Brahmastra clicked at the film’s pre-release event in Hyderabad.

Jr NTR attended the event as its chief guest.

Alia Bhatt chose a unique outfit for the event.

At the release event, Jr NTR praised Amitabh Bachchan and Ranbir Kapoor. He said, “I really enjoy Amitabh Bachchan sir’s intensity in every film of his. I was a big fan of his intensity, his voice, his eyes, his feet…the way he stood, the way he swung his left hand…everything about Amit ji was intense for me. He really created a mark on me as an actor.”

He added, “There is one actor I really connect with and that is Ranbir. Every film of his has really inspired me as an actor and my most favourite is Rockstar. He inspires me. I really like the intensity in Ranbir… it feels great to share a stage with him today in my hometown Hyderabad.”

Ayan Mukerji’s Brahmastra will have a three-part release. Its first part is all set to hit the big screen on September 9. The film was in talks since 2014. Brahmastra marks the first collaboration between parents-to-be Ranbir Kapoor and Alia Bhatt.