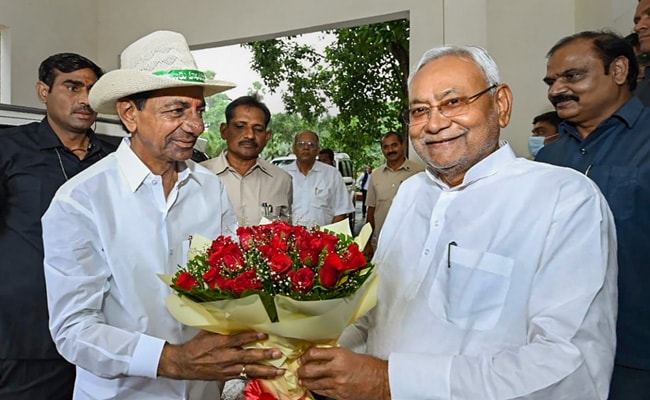 Nitishji, you may ally with anyone, but in 2024 you won’t even remain CM”, Sushil Modi said

The BJP lashed out today as Telangana Chief Minister K Chandrasekhar Rao landed in Bihar to visit Chief Minister Nitish Kumar, setting in motion what is seen as a big effort to gather together the opposition with an eye on the 2024 general elections. Party MP Sushil Modi, who earlier was Mr Kumar’s deputy, ripped into the two opposition leaders, invoking Prime Minister Narendra Modi and challenging them to contest from BJP strongholds in the coming round of state elections.

“Nitishji, you may ally with anyone, but in 2024 you won’t even remain the Chief Minister, forget about the post of the Prime Minister,” said Sushil Modi.

“If KCR and Nitish-ji have the guts, let them contest the elections from Himachal Pradesh and Gujarat. Then they will understand what is the situation,” he added.

He also slammed Mr Kumar’s criticism of the BJP earlier today — “excessive prachaar-prasaar (publicity)” — saying if PM Modi was only dependent on publicity, “then the BJP would not have been ruling over 18 states”.

The party’s former ally, Sushil Modi said, is showing “all the effects of keeping bad company”.

“I’m surprised that Nitish-ji has fallen into bad company. Narendra Modi ji has done so much for Bihar, laid down an elaborate road network,” he said.

“But he is glorifying those who destroyed Bihar,” Mr Modi added, targeting Mr Kumar’s new ally Tejashwi Yadav, whose Rashtriya Janata Dal ruled Bihar for over a decade under the leadership of his parents, Lalu Yadav and Rabri Devi.

Mr Kumar and Mr Rao declared earlier today that they are looking at a “main front” instead of a “Third Front” — indicating that they would try to bring all the opposition parties on board.

Mr Kumar has said that he will visit Delhi soon to meet leaders of other parties.

The two leaders had an hour-long meeting today, where Tejashwi Yadav was also present. After the meet, Mr Rao said, “All opposition parties should come together and “raise slogans of BJP-mukt Bharat… We will try to unite all Opposition parties in the country”.