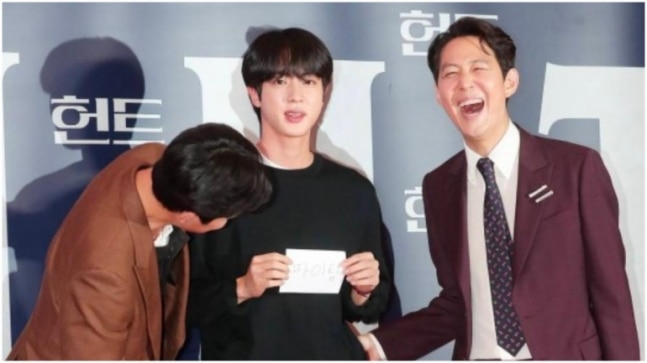 BTS member Jin attended the premiere of the movie Hunt in South Korea. The movie stars Lee Jung-jae and Jung Woo-sung in the lead roles.

On the red carpet, BTS member Jin’s gesture left even the actors of the film astonished. After speaking about the film, he was seen holding a paper that read, ‘ Fighting! Hunt’ in Korean. His sweet gesture left Lee Jung-jae in splits, who couldn’t stop laughing. Jin maintained a composed posture as he attended the event.

Before making it to the premiere, Jin took to Weverse to inform the ARMYs about his appearance and asked them to support him. He wrote, “I won’t be nervous, cheer for me.” After the event, he even thanked the ARMYs and said, “Armys are the best.”

Shortly, according to K-media, Jung Woo-sung spoke about Jin and said, “I met Jin-ssi by chance not long ago. We usually hangout calling each other Chairman Jin and Chairman Jung, so I asked him to come if he had time. Jin said ‘Indeed I have to go and watch’. He’s a junior full of cuteness. He is the best talker after Actor Ju Ji-hoon. It’s to a point I wanna put them together one day.”

Meanwhile, Jin, earlier mentioned that he is working hard on his music as BTS announced they will be focusing on solo projects this year.

The premiere was also attended by Lee Min Ho, Kim Soo Hyun, among others.

This hurts more than 2017: Fans gutted after India lose women’s cricket final against Australia in CWG 2022

This hurts more than 2017: Fans gutted after India lose women’s...