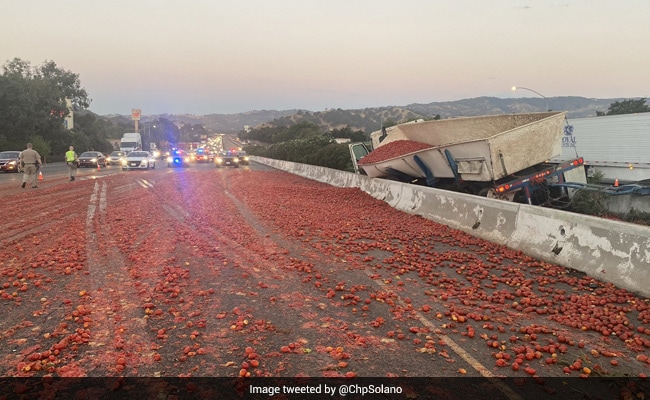 The tomato mass covered a stretch of 200 feet on the California highway.

A huge mass of tomatoes was strewn all over a highway stretch in California after the truck carrying them collided with two vehicles, swerved and hit the centre median, according to New York Times. More than 150,000 tomatoes spilled onto the road causing traffic chaos on Interstate 80 in Vacaville, the outlet further said. The cargo covered eastbound lanes of the highway for about 200 feet and created a red mass that was about “two feet deep”, according to California Highway Patrol.

The accident took place at around 5am on Monday. The drivers passing through the road couldn’t detect the tomatoes and drove over them, crushing the fruit and creating a gooey concoction, according to the NYT report.

“Those tomato skins, man,” NYT quoted Officer Jason Tyhurst of the highway patrol as saying. “Once they hit the asphalt, it’s like walking on ice.”

“I’m just glad there wasn’t a fatality because that easily could have been a fatality,” he added.

The mashed tomato spill caused seven cars to crash on the highway due to which it was closed, according to the BBC. The California Highway Patrol said that three people received minor injuries and fourth one was admitted to the hospital with a broken leg, the outlet further said.

It took several hours for the authorities to open the highway stretch after a clean-up operation.

The crash took place during California’s tomato season, during which the trucks use Interstate 80 to transport the fruit to the Bay Area and Sacramento.