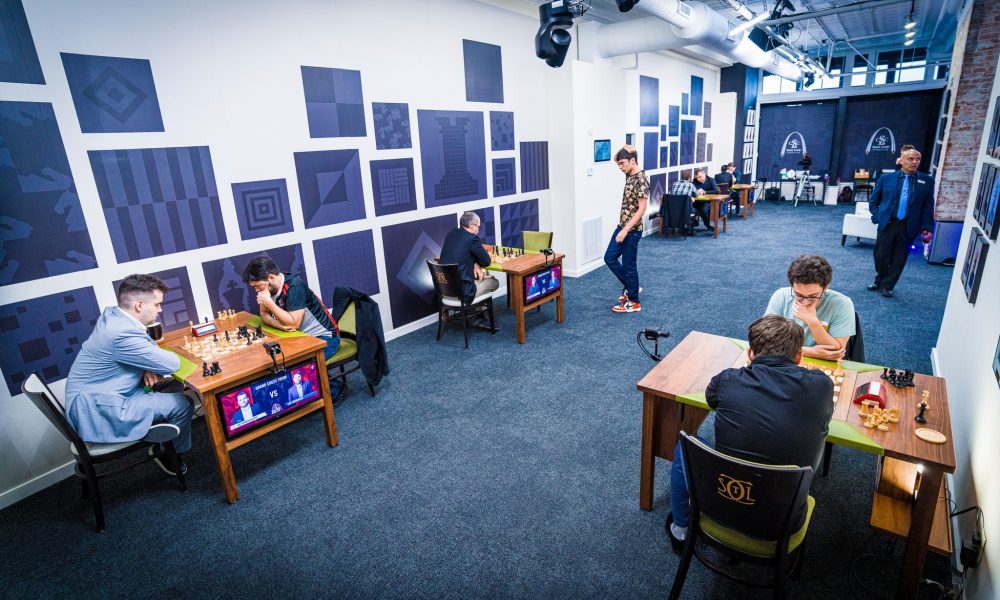 Alireza Firouzja and Maxime Vachier-Lagrave win the rapid portion of the 2022 Saint Louis Rapid & Blitz. It was also a big day for Sam Shankland, who moved up the standings and missed out on the first place after losing the last game. We also followed a comeback for Shakhriyar Mamedyarov, who won all three games today after an unfortunate start of the tournament.

Firouzja-Nepomniachtchi was the big clash of the round. Nepomniachtchi’s risky intuitive play seemed to be about to be punished for the first time. One quick think was not enough to repel White’s unpleasant opening novelty and he had to accept an endgame with an extra exchange for Firouzja. There were many chances for the Frenchman to convert his edge, yet, in the end, Nepomniachtchi saved half a point.

The other game ending in a draw was Aronian-Dominguez — an interesting exchange of opening ideas resulted in a move repetition not too late after players got out of their notes. Shakhriyar Mamedyarov, struggling with three losses and no victories up to this point, beat the super solid Jeffery Xiong in a very convincing manner, steadily growing his advantage all the way until a pawn-up endgame, converting into a full point.

Maxime Vachier-Lagrave outplayed Fabiano Caruana in a seemingly equal, but a bit unpleasant rook endgame, and all eyes were on the Nakamura-Shankland clash. Sam has been having a good tournament so far with all draws, missing chances here and there, and this game was the one to finally break the drawing curse. Nakamura’s Anti-Berlin strategy was not successful and Shankland was absolutely dominating from the early middlegame. The technical stage was a bit rocky, but he eventually managed to promote one of his three extra pawns to a queen and win the game.

There were not too many chances for the two Frenchmen, now in the first place, to improve their positions. Leinier Dominguez decided to check on Maxime Vachier-Lagrave’s homework — repeating a Najdorf line they played in the 2021 Sinquefield Cup, which brought Dominguez a huge victory. MVL remembered the details correctly, though, and demonstrated the precise way to defend and force a draw.

It was a really tough game for Firouzja, who was under a decisive mating attack against Levon Aronian. Fortunately enough for him, the winning line was hard to find over the board, and after the natural continuation, there was nothing more than just a draw.

The magical number of the day was three, and we had three decisive games in every round. Struggling Xiong became victim to Nakamura’s ambitious King’s Indian. Another big result was Sam Shankland winning again, this time vs Nepomniachtchi. Ian had great position out of the opening but his opponent found an escape. When it was time to agree to a move repetition and make a draw, the World Championship Challenger overpressed and Shankland’s counterattack turned decisive. As a result, Sam Shankland tied for the first place before the last round.

In the longest game of the round, Mamedyarov outplayed Caruana, this time with the black pieces, and eventually managed to overcome his defense. Nevertheless, things were far from clear, as even 4 moves before the end, with Mamedyarov’s passed pawns on c2 and d2 about to be promoted and our commentators calling his victory, Caruana missed an incredible chance to save the game.

A short Berlin draw between two of the co-leaders MVL and Firouzja set the stage for the final round of rapid very clearly. It was all in Sam Shankland’s hands. A win against Jeffery Xiong would guarantee him sole first place and a draw would mean tying for first with the two Frenchmen.

Xiong gladly accepted his invitation to play a big game, castling right under Shankland’s queenside attack, while the star of the previous two rounds left his king in the center. The turning point was Xiong’s smart 17…Nb8 retreat, moving his knight closer to the defense. It seemed, there were not enough forces for White to continue his attack, and Shankland later lost control over the position and soon the whole game.

On the rest of the boards, Ian Nepomniachtchi held a slightly suspicious position against Levon Aronian and Fabiano Caruana beat Hikaru Nakamura. The defending champion was the one to make the last mistake in a topsy-turvy game, storming off into the heavy rain outside without his umbrella and moving to the last place.

The man that stole the show and gave the closing interview was Shakhriyar Mamedyarov, though. Scoring another nice win, beating Dominguez, he went from being dead last to sharing fourth place in just one day. After the heroic comeback, winning three games in a row, he’s suddenly back in the race for overall tournament victory.

Replay the broadcast from day 3.

Alireza Firouzja and Maxime Vachier-Lagrave are in the lead, with Sam Shankland one point behind. There are 18 more points to be fought for during two days of blitz and if there’s still no winner at the end of the tournament, than we will have a potential playoff thriller.