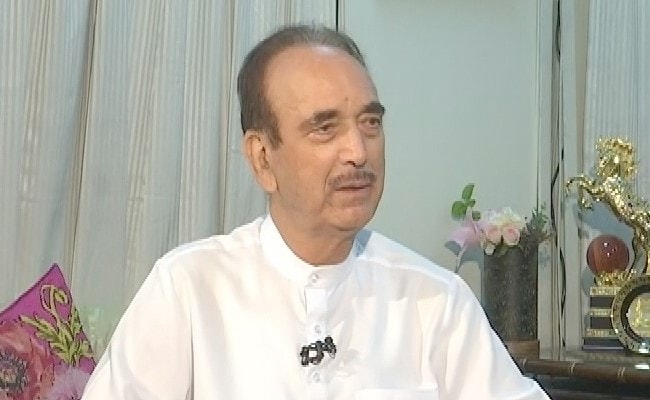 After the Congress lost the election and the BJP won a second straight term, Rahul Gandhi quit as Congress president. At a fiery, marathon meeting of the Congress in which he resigned, Rahul Gandhi said it had become impossible for him to function because of the resistance of the seniors in the party. He cited the example of his “Chowkidar Chor Hai” campaign that he said no one backed.

Rahul Gandhi, according to Mr Azad, asked for a show of hands for those who ever used his slogan while campaigning. Senior leaders like Manmohan Singh, AK Antony, P Chidambaram and Mr Azad were present at the time.

“He made everybody raise their hands – those who said chowkidar chor hai. I was sunk in my chair. So many senior people who have been Chief Minister, ministers with Indira Gandhi, Rajiv Gandhi, PV Narasimha Rao – how do you expect them to speak this language in public? We can right, left and centre oppose somebody but not attack them personally.”

Mr Azad said it was unthinkable for politicians like him to launch a personal attack on opponents.

“We got our political education under Indira Gandhi. While I was junior minister, she called ML Fotedar and me and said we should keep meeting Atal Bihari Vajpayee. See the difference between leader and leader. She said Atalji is also a politician, he must also want to see work done. He will be hesitant to talk to me. So you ask him. So we go the education to respect our elders and give equal respect to opposition leaders. We were not taught to say in public – PM chor hai. But is that an excuse for resigning,” Mr Azad said.

“We can attack Modi right, left and centre, but we can’t go personal like this?  Is this the language senior cabinet ministers should use?”

One of his sharpest comments on Rahul Gandhi in his resignation letter was on his act of tearing a 2013 ordnance in full public view. Mr Azad called it childish behaviour and a glaring example of his immaturity.

“The act eroded the authority of the PM (Manmohan Singh) and the entire cabinet. I don’t know if Rahul ji knows till today how ordinances are issued. Anything passed under the leadership of the head of government and head of state and you tear it up in public domain,” Mr Azad remarked.

On his allegation in the resignation letter that “important decisions are taken by Rahul Gandhi or rather worse his security guards and PAs (personal assistants)”, Mr Azad said, “I have proof. He asked them what kind of president a leader will be…Everybody knows in the Congress party who they are, through whom they reach Rahul Gandhi…”

Mr Azad said Sonia Gandhi was aware of what her son was doing but was completely dependent on him.

“All mothers are like that. All mothers, my mother, your mother, have a weakness for their children.”