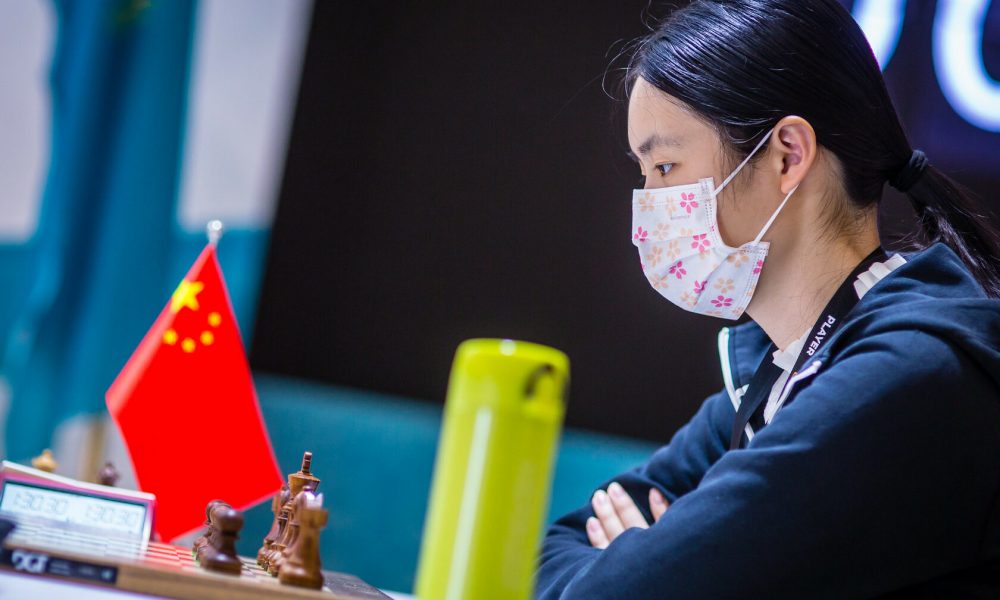 The fourth round of the Astana Grand Prix was no less exciting than any of the previous rounds, even though only two games had a decisive result. After a third of the tournament has been played, pre-event favourite Aleksandra Goryachkina shares the lead with up-and-coming talent Zhu Jiner: both of them are still undefeated.

The level of concentration of the twelve players is amazing: every time I pop into the playing area to check on the games, I hardly ever see any of them on their feet looking at the other games. It’s fully understandable how tired they feel at the end of these strenuous playing sessions and the fact that each day they come to play with added energy is to be commended.

The young Indian prodigy, replacing GM Humpy Koneru here in Astana, repeated the Italian Opening, which she played against Kashlinskaya in round two. She brought to the table a rather new idea (a3-b4-Bb2), expanding her queenside and achieving quite a serious space advantage.

However, the position was so closed that both players manoeuvred for most of the game, while Vaishali was gradually getting very low on time. With less than 5 minutes for the last ten moves – Tan Zhongyi had more than an hour on her clock – she offered a draw which was rapidly accepted.

The tournament leader opened the game with 1.e4 and Assaubayeva repeated her favourite Sicilian Najdorf. The former Grand Prix winner had worked on the positional 7.Nf3 variation of the English Attack and blitzed out her first seventeen moves: impressive preparation! It seemed that Assaubayeva wasn’t totally sure how to counteract her opponent’s plan and soon fell into a slightly passive position, with pawn weaknesses on a5 and especially d6. Nonetheless, the second-best Kazakh female player defended tenaciously and even found a nice tactical trick to hold the balance. A draw was agreed just after the 30th move had been reached.

Visibly happy, Bibisara took us through the game in a short interview.

A very equal game. After an opening move transposition, both players headed down one of the more fashionable lines of the Sveshnikov variation in the Sicilian. With precise defensive play, Paehtz neutralized White’s positional ideas and after 20…b4 had equalised comfortably. Paehtz went through a tough moment when Abdumalik opted to exchange queens: the ending was slightly better for White, but with precise play a draw was agreed.

The top German female player for the last twenty years visited the press centre and recorded a short interview. “At some point I lost the control of the position. I was very happy when she decided to exchange queen’s as I didn’t think I had enough weaknesses to lose the game” Elisabeth explained to press officer IM Michael Rahal. Don’t miss the interview, especially if you speak German-speaking fan of Elisabeth Paehtz!

In the clash between two of the youngest players in the tournament – born in 2001 and 2002 respectively – the game opened with the Ruy Lopez, and for many moves followed an old 1995 game between GM’s Matthias Wahls and Michael Adams. The evaluation remained balanced for some time: Shuvalova’s kingside pawn structure was slightly damaged but in return she had a superior pawn centre. A manoeuvring phase began, with each player hoping to find the best squares for their major pieces.

It seemed that the Chinese star was getting the upper hand, installing a strong rook on d3 but, low on time, she offered an untimely exchange of queens. In a very tricky double-rook ending, Shuvalova unfortunately missed an opportunity to win (36.f6! was her best try) and then blundered an unbelievable stalemate opportunity towards the end of the game.

With this result, Zhu Jiner leads the tournament tied with Aleksandra Goryachkina. Although she is still learning English, she always welcomes the opportunity to practice the language in the post-game interviews.

The Gran Prix Attack against the Sicilian is a very dangerous weapon in the hands of a skilled attacker. Kosteniuk opted for this line today and after 8.f5! was already scanning Black’s weak f7 square. Wagner was clearly out of preparation: she took thirty minutes to calculate the consequences of 8…Ng-e7 and the other eighth-move alternatives. “I thought it would be fine is someone played the Grand Prix Attack here at the Grand Prix but unfortunately I didn’t prepare it” she regretted after the game. To avoid a direct catastrophe, Wagner was forced to give up her dark-squared bishop: Kosteniuk gradually honed in on the weakened king, sensing the kill. But as all chess players know, it’s never easy. 20.Ne6! looked very strong (instead of Bd6) and further on 26.Rc1 with equality was definitely better than 20.Re6. Wagner won a pawn, turned the tables and with good endgame technique scored a huge victory.

Dinara reflected upon her performance in a short interview.

The Exchange Variation in the French Defence has always been considered a drawish line. However, Lagno’s 5.c4 idea definitely spiced up the game: with two White’s in a row, and full confidence after yesterday’s victory, the former two-times European Champion was playing for a win. Although essentially dealing with a side-line, both players demonstrated fine preparation, blitzing out their first ten moves, reaching a more or less balanced middlegame. Just when things seemed to be heading to a draw, Kashlinskaya lashed out with a badly-timed 27…a5, a seemingly aggressive pawn breakthrough.

Lagno captured the pawn and after the exchange of rooks went into a very favourable, probably winning queen endgame. However, unable to find the most precise moves in time trouble, the advantage faded away and a draw was agreed on move 82.