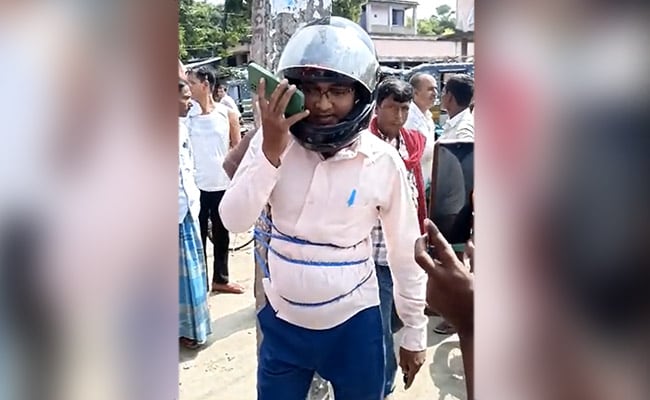 Kisan Salahkar Nitin Kumar is seen tied to a pole in Bihar’s Motihari.

A government official in Bihar’s Motihari was tied to a pole by the farmers who were angry by the hoarding and “black marketing” of fertiliser. The official, identified as Nitin Kumar, who works as a Kisan Salahkar – an advisor appointed by the agricultural department – is seen narrating his ordeal to someone on the phone. The farmers claim that they are not getting enough fertiliser, and have to pay a higher price for whatever amount is made available. The video of the treatment meted out to the official is going viral on social media.

The farmers allege that the advisor is working hand in glove with the fertiliser sellers to inflate the price.

They say that a sack of urea is sold by the government at Rs 265, but the same quantity is sold at Rs 500-600 by local shopkeepers.

As soon as the video appeared on social media, local administration swung into action. The area’s Circle Officer was quoted as saying by local publications that the farmers were persuaded to free Mr Kumar and have been assured that they will get all the material needed for farming at government rates.

Last month, a video showed students of a government school in Bihar’s Jehanabad performing menial jobs in flagrant violation of anti-child labour law. In the footage, children can be seen chopping wood, cutting stones and digging the ground.

District Magistrate, Richie Pandey, admitted that he was aware of the matter, adding that disciplinary action was ordered against authorities of the school concerned.

He said that upkeep at the school was abysmal and the attendance very low.