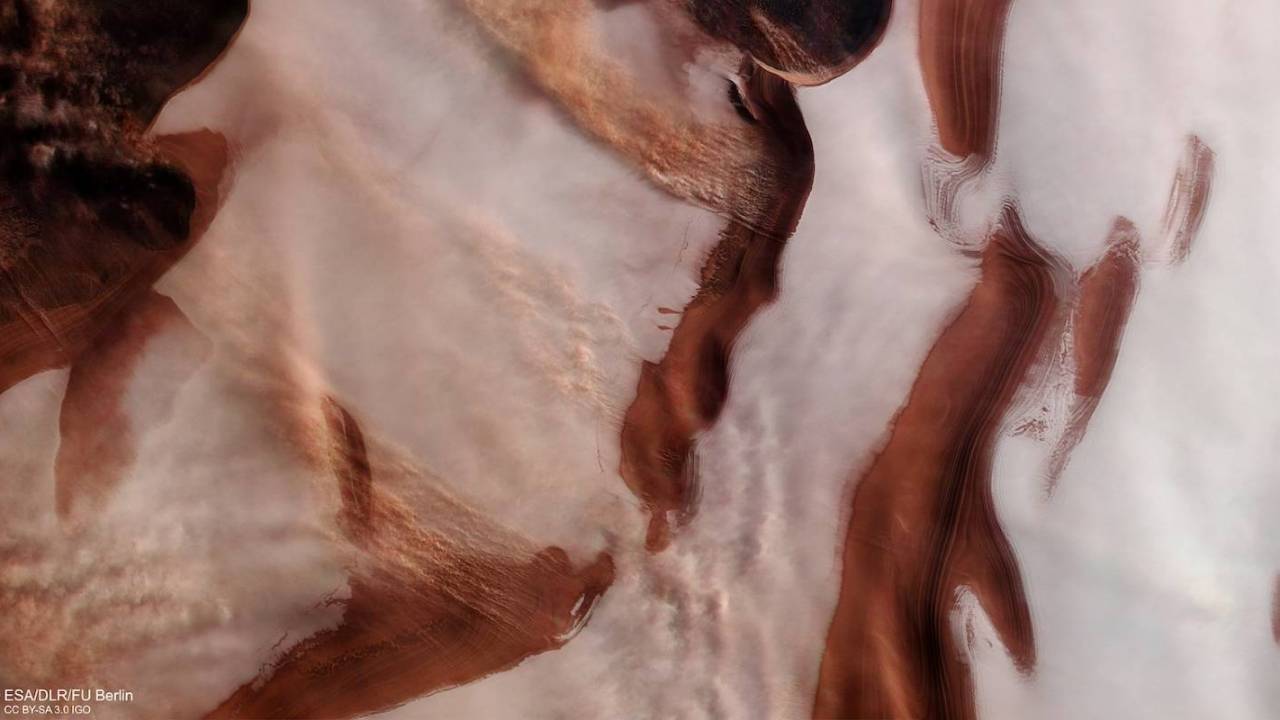 Mars is truly an enchanting place. Our machinery on and around the Red Planet sometimes tries to do justice with its exquisite beauty that we now know of and is complete with desert landscape and ice dune fields among other marvelous things. Recently, the European Mars Express unveiled a beautiful image of the icy cap sitting at Mars’ north pole, featuring bright swathes of ice, dark troughs and depressions, and signs of strong winds and stormy activity.

SEE ALSO: This Bleak NASA Mars Curiosity Rover Image Will Give You Chills!

It might seem delicious swirls of a chocolate/ vanilla ice cream sundae at first glance. On looking closely, we can see Mars’ north pole covered with large sheets of snowy white ice surrounded by otherwise reddish and dusty terrain.

The image is unbelievably clear and smooth, something that a 4K drone camera would be able to produce. The view comes from Mars Express’ High Resolution Stereo Camera (HRSC) that was peering through a thin cloud cover at the time when the image was shot in the summer of 2006.

According to the ESA, the layers of ice that cover Mars’ poles are layered in such a way that they ‘subtly shift’ over the course of a year, causing changes to their overall composition and coverage. The poles have a permanent cover of water-ice during the summer, something that thins during the freezing winter as carbon dioxide starts to build up.

The spiral pattern showcased in the image is partially the result of katabatic winds, which the ESA says, uses gravity to move the dry frigid air into warmer areas down the slope. ESA refers to these icy poles as particularly interesting areas on the Red Planet. Each layer of ice and dust is essentially a ‘snapshot’ of the changes that have taken place, that help shed light on Mars’ climate and the ways it has changed over time.

SEE ALSO: Scars On Mars: Raging Gas Explosions and Winds Are Shaping Up The Geology Of Mars

‘The Mandalorian’ returns for Season 2 on Disney+ in Fall 2020

Update WhatsApp To Block a Bug From Erasing Your Group Chats

Here are the five Startup Battlefield finalists at Disrupt Berlin

PS5 games: all the games confirmed and expected on the PlayStation 5

Not All 5G Is The Same. An Expert Breaks It Down

Kill Bill 3 could happen, but Tarantino might make a TV show first

POTUS Donald Trump Has Been Impeached. What Happens Now?

Why Do We Crave Social Media Validation?

Apply to the pitch-off at TC Sessions: Robotics & AI 2020