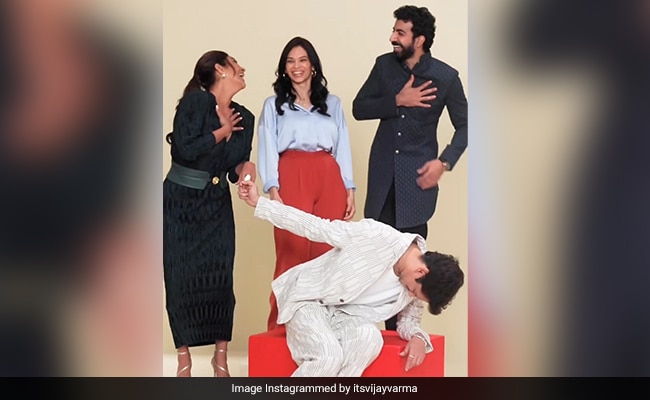 Alia Bhatt and Vijay Varma’s latest film Darlings has been basking in success ever since it premiered on Netflix on August 5. All the love and appreciation that the film has been receiving is overwhelming for its star cast, who recently celebrated the success of Jasmeet K Reen’s directorial debut at the Netflix Films Day event. Vijay even shared glimpses from the event on his Instagram profile and shared an adorable note for mom-to-be Alia, who couldn’t attend the star-studded affair. The album also features Shefali Shah, who played the role of Alia Bhatt’s character Badru’s mother Shamsunnisa, and Roshan Mathew, who portrayed the role of Zulfi in the film, along with director Jasmeet and Netflix India’s Vice President of Content Monika Shergill.

Sharing the pictures, Vijay Varma wrote, “We celebrated all the love we received for Darlings at Netflix. We misses you darlings, Alia Bhatt” and added a heart icon for his co-star. Alia was recently spotted promoting Ayan Mukerji’s Brahmastra, in which she stars alongside her husband Ranbir Kapoor for the first time.

Vijay Varma has also shared a series of photos from the Netflix Films Day event on his Instagram stories. Posting a group photo, where the cast is all smiles with Jasmeet K Reen, Vijay wrote, “For Darlings team, there’s nothing like ‘too much drama’.”

Darlings, which is the maiden film of Alia Bhatt as a producer, stars Vijay Varma as Badru’s abusive husband Hamza, who is a railway employee. In case you haven’t seen the movie yet, check out Darlings trailer here:

Vijay Varma is best known for his performances in movies such as Pink, Gully Boy, Ghost Stories, and the web series Mirzapur.