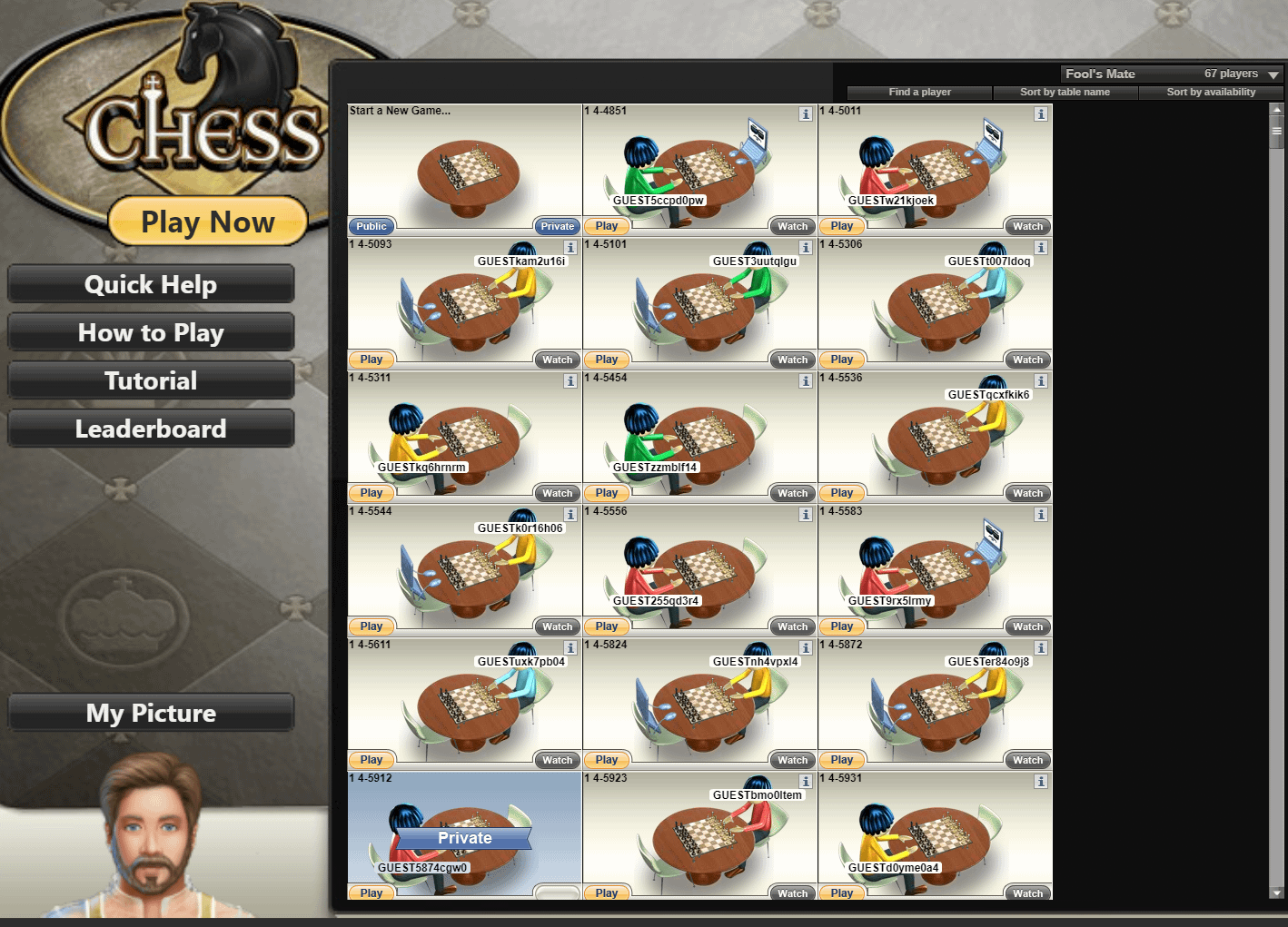 tl;dr Score summary is at the end.

After disabling Ghostery so that the weird aspx page could load the best web graphics 1998 has to offer, I found myself presented with as many as 5 buttons. Naturally, I had to customize my profile picture first so that my opponents would know what they were facing. I didn’t have any purple diamond currency things, but still managed to put together this highly-accurate portrayal.

Next I clicked the Play Now button and was immediately matched with an opponent. Out of the four games I played, three of them were generic guest profiles with no games played like this one, which is always a dangerous tossup. What if I end up facing an unrated master!??

My first opponent played at maybe a 900 level. Not a total novice, but quickly dropped pawns and then was forced to lose a piece. My second opponent appeared to be a novice who attempted the classic 1.h4 against me and resigned quickly, but my third game put me up against a serious foe.

“Don Y” was rated 1563 and had clearly survived trial-by-1500s and was ready for a fight, as you can tell by his eye patch. After almost 2 minutes of not moving, he finally played 1.e4 and we went into a moderately theoretical French. Eventually I managed to overload a defender and win material, allowing me to capture his center pawns and force my D pawn up the board to victory. It was a good game.

Afterward, I went to go review the game and figure out where I lost theory and realized that there’s no way to review your games at all. That French defense is lost to history. All chess on MSN Zone is like music – to be enjoyed in the moment, and then lost to the winds of time, living on only in memory. Oh well.

Clicking around allowed me to find the Leaderboard, showing a fierce battle between moewebb115 and SPANNP, both of whom are solidly over 4000 rating (watch out Magnus!)

I also found my own stats page, which shows only how many wins and losses I have, how much total time I’ve spent, and my fastest win (4:29 if you were wondering).

Everyone is forced to use the same time control, which appears to be a 2 minute delay, no reserve, no increment. If you ever take more than 2 minutes to move, you lose immediately.

Honestly it wasn’t the worst. It encourages you do spend a little time thinking but kept the game moving for the most part. Fortunately none of my opponents were malicious.

It felt about as clunky as it looks. Selecting a piece highlights all available moves, but you cannot click pieces on your opponent’s turn and cannot premove. Right clicking opens the ‘save image’ dialog lol.

There were no animations but there were dramatic little sound effects whenever you captured pieces or gave check.

There are a number of lobbies with various chess-themed names, like “Backward Pawn”, “Fork”, and “Fool’s Mate”. Honestly this was the only part of the game that felt like it was made by someone who knew chess.

Three of the rooms had about 50-70 players in them each and the rest were empty. You can see all the currently active games in each room and ‘watch’ them if you want, or sit down to play at them manually. If you click the ‘Play Now’ button it just puts you at one of them.

I mostly got matched with people close to my rating, but I have no idea how that works if you get up to 2000. Given how easy it is to farm points off 1500s, it seems likely that there are many players in that range, though almost all the people at the tables had some GUEST name.

You can actually play against a computer as well. Your three choices are “Easy” “Medium” and “Expert”, and it tells you what your rating change will be if you win or lose. I figured I would try Medium and get stomped, but actually it was not a super hard match.

It played super fast and rapidly tromped along into a French defense – Burn variation, which I only know up to 7…f5 in this variation, but then it started making some obvious mistakes. It randomly threw away its bishop for a pawn, which I thought must be some kind of computer trap, but it turns out it was just a terrible move and then I converted the advantage.

I managed to copy the moves before the room closed. Running the game through a Game Review on chess.com scored the bot 64.7 on accuracy, with 2 blunders, 6 mistakes, 2 inaccuracies, 7 book moves, 3 good moves, 2 excellent moves, and 7 best moves.

Overall, it was pretty awful, but sort of amusingly nostalgic.

Basically everyone is “GUEST” with 1500 rating, but no one typed vulgarities in the chat or slow rolled to abuse the infinite clock while they were losing (small sample size). I did have one good game.

At least I didn’t have to install a desktop client, but the idea of trying this on mobile is terrifying.

There’s no way to review your games, or even find your moves once you’ve left. You can’t copy and paste out of the move list, and you can only view your previous game’s moves while in the lobby that has a constant countdown trying to start a new game.

There’s a ‘Tutorial’ button, and clicking on it causes a warning popup in the browser indicating ‘ChessTutorial.en.swf’ was blocked because this type of file can harm your device. lol flash

It did let me play chess.