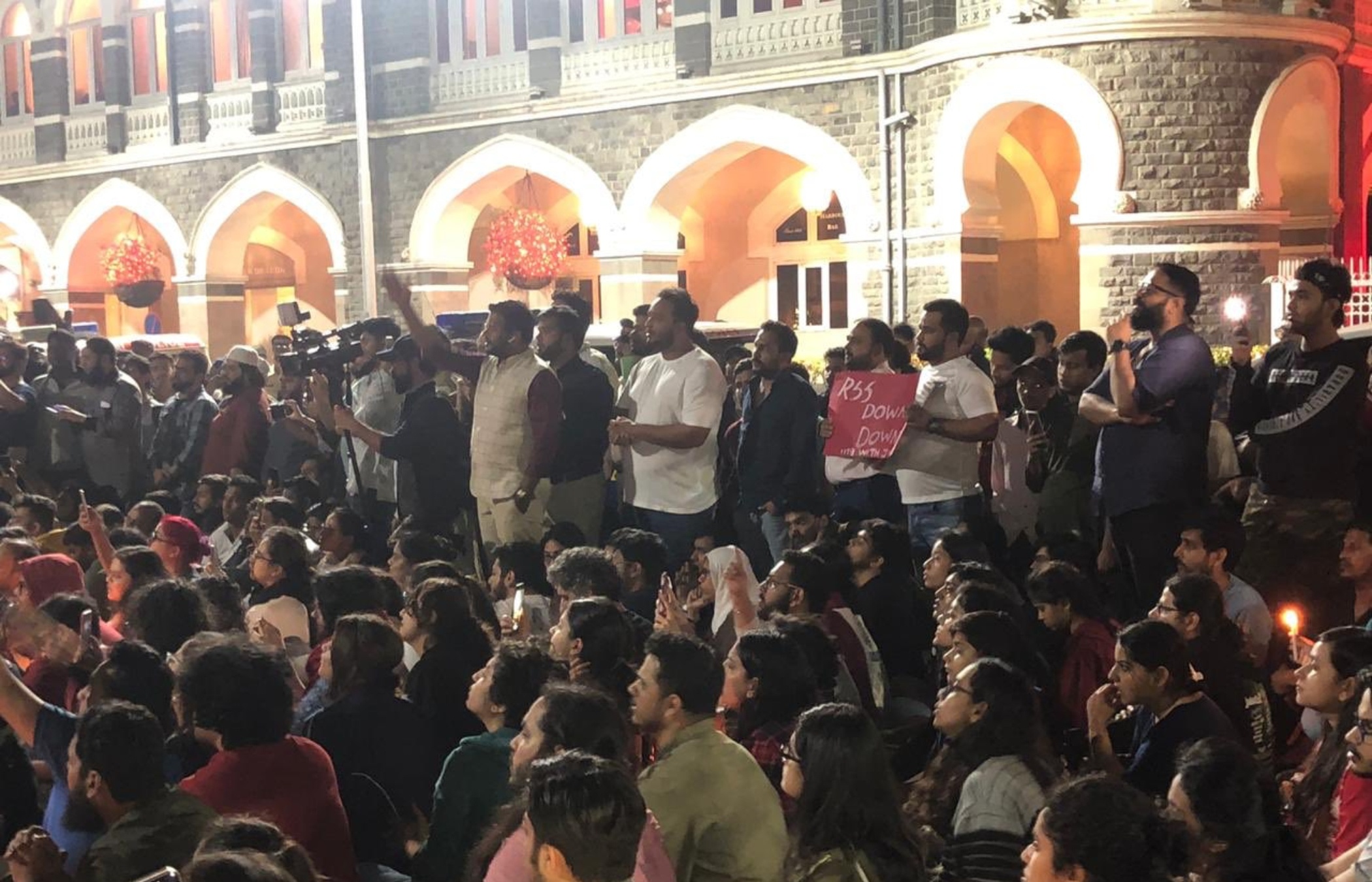 Mumbai had a spontaneous protest at Gateway of India in solidarity with JNU students. On Sunday evening, JNU campus was attacked by masked goons from ABVP armed with sticks and rods. They reportedly attacked students and teachers as Delhi Police stood guard. As soon as the photos and videos began doing the rounds of social media, students from Mumbai gathered for a candle-lit anti-CAA protest at the city’s landmark which continued till Monday morning.

Students from Mumbai united to occupy Gateway to condemn the attacks on unarmed JNU students at the campus and hostel on January 5, 2020. The state-sponsored attacks by RSS-backed student union ABVP (Akhil Bhartiya Vidhyarthi Parishad) came as a major shock. As per reports on NDTV, 34 students and teachers were injured by the mob including JNUSU president Aishe Ghosh. Anti-CAA protests have been going on for weeks now and Mumbai isn’t showing signs of slowing down. The spontaneous protests began with a candle-light protest with students and citizens showing up in large numbers after word got around on social media. Joining Mumbai’s protestors were JNU alumni Umar Khalid and Kunal Kamra. The anti-CAA protests lasted all night. Here’s what the scene looks like at Gateway of India, Mumbai as recorded by netizens:

Snaps from people at Gateway Of India, Mumbai , where Midnight Candle light vigil held by students of various institutions right now in support of #JNU students as symbolic protest against #JNUattack .. the students from various universities joining in.. #standwithJNU #JNUSOS pic.twitter.com/5xDhuQ30v3

Location: Outside Gateway of India, Mumbai

Back again with water and vada pav! Come on Mumbai ! Let’s keep our protest going ! Leave your politics at home ! pic.twitter.com/Q3aj55aFGT

It’s 6 26 am, Just got home from the protest at gateway of India, mumbai against the #JNUViolence
It was great to see youngsters & seniors recite patriotic poems, singing songs describing our great #India
Our Unity is our strength!#JNUattack #EmergencyinJNU #MumbaiWithJNU pic.twitter.com/I6zagnGHAN

People have been here since 12 AM and the protest has been declared indefinite! Show up!

The call to occupy Gateway of India attracted a huge crowd from Mumbai colleges including TISS, IIT and Mumbai University who stayed till morning and managed to gather even more protestors from the city.

“We the students of TISS, IIT, University of Mumbai etc have actively and successfully occupied the heart of the city at Gateway until we don’t know when! We need more representation across student groups/ collectives/ fronts. Please come and join in large numbers with your banners. We need food, warm clothes, newspapers and a lot of you here,” – Statement via NDTV

Meanwhile, footage on news channels and the internet features a mob breaking into JNU hostels and brutally attacking students and teachers while damaging property. This case of JNU violence comes weeks after the Delhi police brutality at Jamia Millia Islamia University which sparked nationwide protests.

Our Most Popular Money Advice of 2019

The vast majority of US consumers aren’t spending $1,000+ on phones

We Held A Meditation Contest At The World’s Most Stressful Tech Conference. Here’s What Happened!

The Force is strong with the Galaxy Note10+ Star Wars Edition

Scientists Built A Robotic Pigeon Wing That Flaps Just Like A Real Bird!

Best computer speakers 2019: the best audio systems for your PC