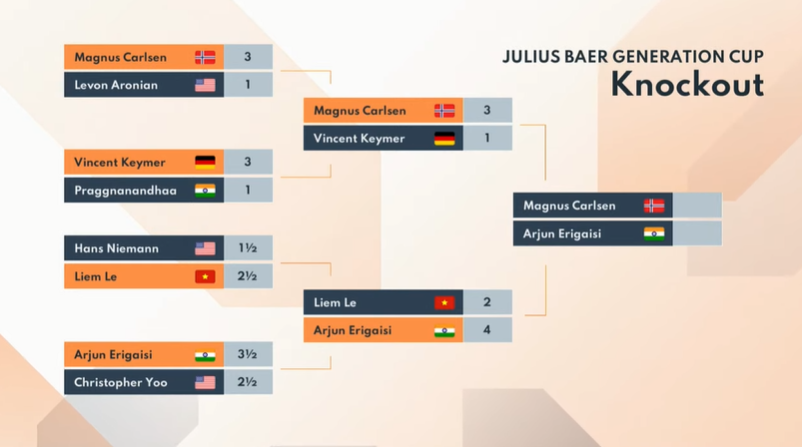 World Chess Champion Magnus Carlsen defeated Vincent Keymer with a convincing 3-1 score. The first two games finished in a draw as Vincent Keymer played brilliantly. Carlsen won the third game since Vincent missed the only move to save the endgame with a pawn down. 81…Nc6?? was a terrible mistake, while 81…Nf5! could’ve saved the result for the 17-year-old German grandmaster. Keymer needed to win the fourth game to stay in the match and schedule the tiebreaks, but Magnus took all the initiative from the early part of the game and eventually scored. “I was very impressed with his play, he is very very strong. As you can see from the end of the game 3 and the game four, he still has some challenges with experience and practical play, but basically, he is a very good player”, said Magnus in the post-match interview.

The second finalist of the Julius Baer Generation Cup was determined in the tiebreak mini-match as the rapid portion finished with a 2-2 result. After the first game of the rapid part finished in a draw, Arjun Erigaisi took the lead as he defeated the Chinese grandmaster in the second game with whites. The third game finished in a draw and just when it looked that Erigaisi will get to the finals, Liem Le won the fourth game on demand and brought the match to the tiebreaks. The Indian 19-year-old crashed his opponent in the blitz match winning both of the games and taking his seat in the Finals against World Chess Champion Magnus Carlsen. Erigaisi said in the post-match interview that qualifying to the finals means a lot to him. “It will be very interesting to play against Magnus Carlsen and I think I will learn a lot from it“, added Arjun.

The final match of the Julius Baer Generation Cup will be played over two days 24-25 September, with two 4-game rapid matches. If the result is 1-1 after two played matches, the winner of the event will be determined in the playoffs. The play-off consists of 2 blitz games, followed by an Armageddon game if the score is 1-1.

"pretty much nothing surprising in the chess.com report glad it’s finally exposed how many chances cheaters get on chess.com and how few consequences there...

29:09): “Raymond Reddington is my absolute hero…the way he runs his criminal organization, I would say, has inspired the way I think about chess.”...

I should have played another opening – Chessdom

"pretty much nothing surprising in the chess.com report glad it’s finally...

I should have played another opening – Chessdom