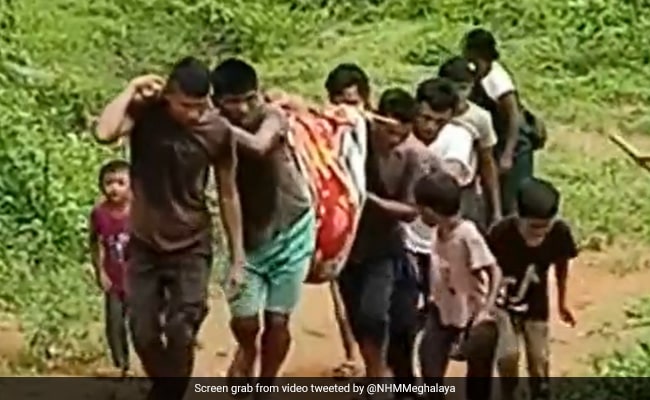 In the absence of an ambulance or a vehicle, a 36-week pregnant woman of Meghalaya’s Ri-Bhoi district was on Monday carried on a makeshift bamboo stretcher for five kilometres to a hospital where she delivered a healthy girl, an official said.

During the journey, the woman with high blood pressure was struggling with labour pain but made it to the health centre on time.

“Volunteers from Jalilum village took turns to carry the patient for nearly five kilometres as there was no vehicle or ambulances there,” Dr C Lyngdoh, in charge of Patharkhmah Community Health Centre, told PTI.

She delivered a baby girl weighing a little over four kilograms at the CHC and both are fine, Lyngdoh said.

A video of the woman being carried on the makeshift stretcher went viral on social media, with people criticising the administration.

Community Members from Jailum #Ribhoi, came forward and volunteer to carry the pregnant woman to the Health Centre using a makeshift stretcher. The pregnant woman was also accompanied by the #MLHP of Umsong #HWC & reached the health facility safely@CMO_Meghalaya@JamesSangma1pic.twitter.com/rfIyQf7Ex6

The road between Jalilum and the health centre is in bad condition due to heavy rainfall and non-maintenance for the past several years, an elder from the village alleged.