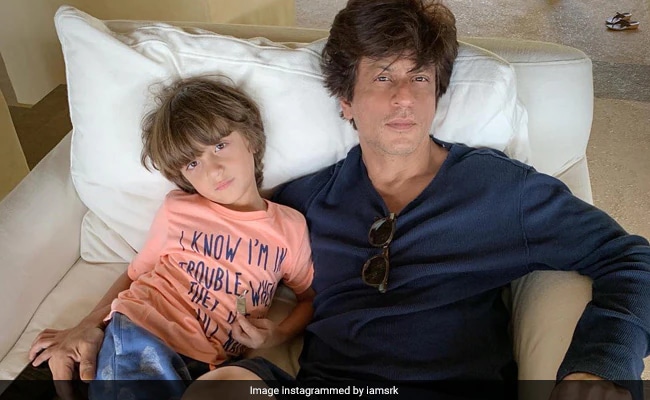 A throwback of SRK and AbRam. (courtesy iamsrk)

Like every year, this year too Shah Rukh Khan shared a picture from the Ganesh Chaturthi festivities at home. The superstar posted a picture of Lord Ganesh’s idol on his Instagram profile on Wednesday evening and he wrote: “Ganpatiji welcomed home by lil one and me….” He added in his caption: “The modaks after were delicious… The learning is, through hard work, perseverance and faith in God, you can live your dreams. Happy Ganesh Chaturthi to all.” The picture also has a glimpse of the superstar along with his and Gauri Khan’s son AbRam. The comments section of SRK’s post was filled up with wishes from fans in no time.

Shah Rukh Khan married Gauri Khan in 1991. The star couple are parents to Aryan, 24, (their eldest child), daughter Suhana and 9-year-old AbRam. Aryan Khan graduated from University Of South California. Suhana (22) is shooting for Zoya Akhtar’s The Archies. The film will mark her acting debut.

Gauri Khan is an interior decorator and she owns the plush Gauri Khan Designs in Mumbai. She has given makeovers to several suburban Mumbai restaurants and celebrity homes over the years. She has redecorated homes for several Bollywood A-listers. She has designed restaurants like Arth and Sanchos. Other than that, she is film producer and made her debut as author last year.