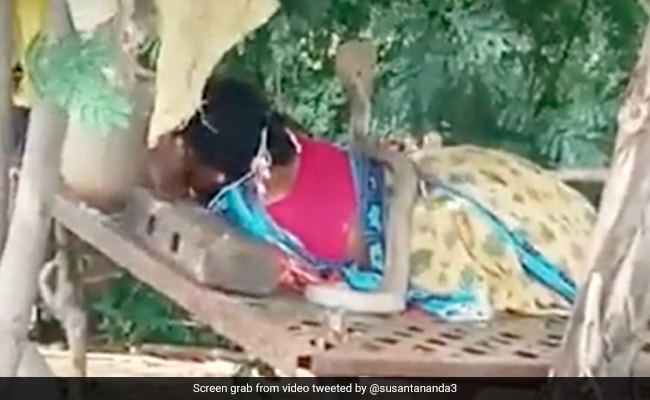 The location of the incident is yet to be known.

In a hair-raising incident, a woman was recently seen resting on a cot even as a cobra climbed up her back. A video, shared by Indian Forest Service (IFS) officer Susanta Nanda, showed the snake perched on top of the woman while she remained in the same position and apparently called out for help.

“When this happens, what would be your reaction??” Mr Nanda wrote in the caption while sharing the shocking clip.

Watch the video below:

When this happens, what would be your reaction??

For information, the snake moved away after few minutes without out causing any harm…
(As received from a colleague) pic.twitter.com/N9OHY3AFqA

In the footage, the snake was seen perched on top of the woman and ready to strike. However, as per the caption of the post, the reptile sat still on her back for about a few minutes, before it slithered away without causing any harm.

Since being shared, the video has left the internet amazed. It has garnered more than 34,000 views and nearly 1,000 likes.

One user wrote, “I would have reacted the same way as the woman there doing… Silently chanting shiva’s name! This video is a proof that faith in God gives strength to face the tough times in life.” Another said, “Best reaction wud be ‘Not to react at all'”.

A third added, “As far as I know snakes are more afraid of humans than humans are of snakes. I think they will not attack unless they sense a hostile attitude so if possible human should quietly move away or keep still.” “That lady did well! Of course drenched in fear but did not panic , didn’t threaten the snake in any way ..needs patience ..any sign of threat , snake would have gone for a lil,” commented fourth.

The location of the incident is yet to be known.