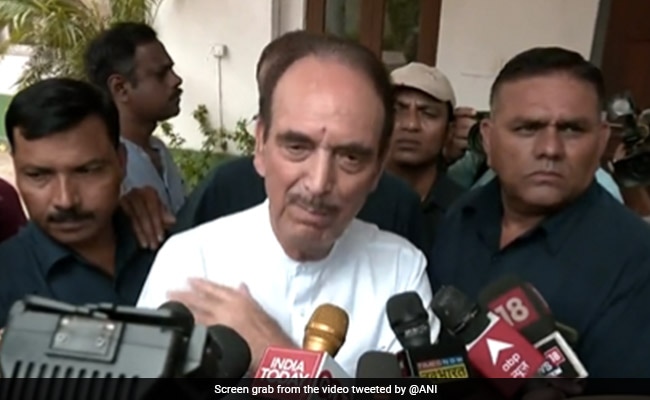 “Read the contents of his speech. PM Modi was not talking about being sad at my leaving the House. He was talking about an incident,” said Mr Azad.

“Some tourists from Gujarat had died in a grenade attack in Kashmir (in 2006), when I was chief minister there. Modi saheb, who was chief minister of Gujarat, called my office. But I was choked up, crying at how brutal the killings were. I could not speak with him. He heard me crying as my staff brought the phone close to me,” he recounted.

The attack happened on May 25, 2006, in Srinagar, in which four tourists were killed and six were injured.

#WATCH | “I thought PM Modi to be a crude man but he showed humanity,” says Ghulam Nabi Azad pic.twitter.com/LhVHopvdhe

“Mr Modi kept calling my office for updates. Later, as I was seeing off the two planes carrying the bodies and those injured, families of the victims were howling in grief. I started weeping too. It came on on TV too. He called but, again, I could not speak,” he said.

Mr Azad has been facing allegations by the Congress — that he’s being controlled by the BJP — ever since he left the party after an association of five decades, casting serious aspersions on its leader Rahul Gandhi.

“I used to think Modi saheb must be a crude man,” Mr Azad added, speaking to reporters about the crying episode, “I thought he won’t care… since he does not have a wife or any kids. But, at least, he showed humanity.”

Earlier, speaking to NDTV, Mr Azad said he was among senior Congress leaders who disagreed with using the slogan “Chowkidar Hi Chor Hai” against PM Modi that Rahul Gandhi brought up before the 2019 elections. He said the seniors were all for policy-based opposition to PM Modi — who calls himself the “chowkidar” or watchman of the country — but they could not use words such as “chor” (thief) against a prime minister. “That’s not our culture,” he said.

About his plans now, he declared that he will not do any business with the BJP. He underlined his announcement to form his own party — starting with Jammu and Kashmir, where elections are likely by early next year.

Citing differences over ideology, he said the BJP and he have “different vote banks”, so “there is no question” of working together.