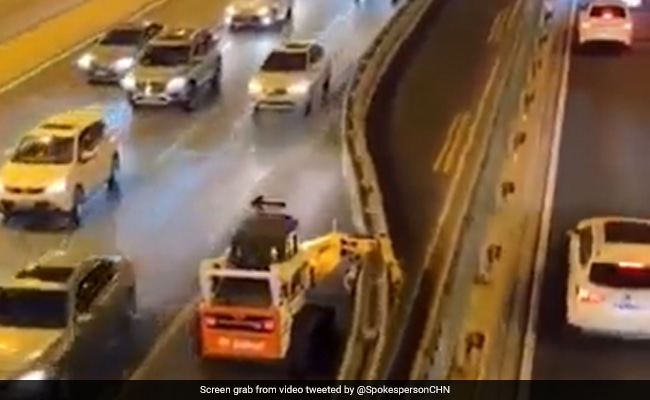 Major cities across the world often face long traffic hours, perhaps that is why innovations that solve the problem instantly grab eyeballs on the internet. Now, one such innovation gaining traction online shows how China uses adjustable road dividers to change the “direction of traffic”.

Taking to Twitter, Chinese Foreign Ministry spokesperson Hua Chunying on Wednesday shared a fascinating video which showed the working of reversible lanes that help improve traffic flow in China. “Here’s how they do it. The traffic authority selects a lane to go one direction in the morning and the opposite direction in the evening to release peak pressure,” Ms Chunying explained in the caption.

Watch the video below:

#ChinaInfrastructure: How does Beijing relieve traffic jams? By changing the direction of traffic. Here’s how they do it. The traffic authority selects a lane to go one direction in the morning and the opposite direction in the evening to release peak pressure. pic.twitter.com/OaaxycwDJQ

In the clip, two vehicles are seen folding a reversible lane or a zipper lane which was set up to ease traffic congestion in the city.

Since being shared, the short clip has racked up more than 80,000 views. Several internet users applauded the idea. Some even offered examples of other cities where traffic is reversed during peak hours.

“Another example of innovation and technology for the benefit of mobility for the world,” wrote one user. “Human wisdom is further highlighted in solving practical problems,” added another.

A third said, “The first reversible lanes in world was on the Golden Gate Bridge, 1962. Just for reference,” while a fourth commented, “Clever. And safer than just changing direction by lights and signs”.

“Reversible traffic lanes add peak-direction capacity to a two-way road and decrease congestion by borrowing available lane capacity from the other direction,” as per the Texas A&M Transportation Institute.

This is not a new technology. As mentioned above, this infrastructure innovation was first introduced by the United States back in the 1960s in order to reduce the traffic congestion on the Golden Gate Bridge roadway.