IM Christopher Yoo was victorious in his round of 16 match today against GM Rameshbabu Praggnanandhaa in the 2022 Junior Speed Chess Championship presented by SIG.

Few points separated the players for the majority of the match, but it was the American IM, who already earned and is awaiting confirmation of his brand new GM title, who was able to win a streak of games in the bullet portion to close out the match with a score of 16.5-13.5.

The next round of 16 match will pit the two-time Junior Speed Chess Championship winner, GM Nihal Sarin, against the dominant qualifier, GM Aronyak Ghosh, beginning on Tuesday, April 19, at 6 a.m. Pacific / 22:00 Central European.

The Junior Speed Chess Championship presented by SIG is the second leg of the 2022 Speed Chess Championship where top junior players compete in a series of speed chess matches. Each match consists of a 5+1 blitz segment, a 3+1 blitz segment, and a 1+1 bullet segment, with the player who scores the most points winning the match. If there’s a tie, players play a four-game 1+1 match to decide the winner. If the tie persists, an armageddon game with a bidding system decides the winner.

The 5+1 time control started in a very unusual fashion with Black winning each of the first five games and neither player able to make inroads with their White repertoires.

A humorous moment came in the opening game when Praggnanandhaa accidentally underpromoted to a knight, but already losing in the position, he chuckled and moved on.

A variety of opening setups were tested during this period, with Pragnanandhaa’s King’s Indian Defense perhaps proving the most effective. The Indian GM was able to decimate his opponent’s kingside in the fourth game with a three-pronged attack after ripping open the e-file.

The sixth game of the 5+1 segment was important as Yoo became the first player to break the curse of the white pieces, holding Pragnanandhaa to a draw after losing an exchange early. A powerful bishop pair allowed Yoo to fight back before his opponent was forced to liquidate into an equal endgame.

Commentator Naroditsky showed a tricky line where Praggnanandhaa could have caused additional problems for Yoo, but in time trouble the line was missed.

Down by two points, Pragnanandhaa clutched up in the final game of the 5+1 segment where he was able to build an overwhelming center and blast through Yoo’s position, bringing the deficit back to a single point heading into the 3+1 games.

Yoo started with a bang in the 3+1 segment, winning comfortably on the white side of a Sicilian Alapin. He was able to punish Praggnanandhaa when the latter pushed his king forward too early in the endgame. Yoo did not need to be asked twice and whipped his knight into action, sacrificed a pawn, and forked Praggnanandhaa’s king and rook.

Yoo was able to stay one step ahead of the recent winner of the Reykjavik Open throughout the early 3+1 games, though Praggnanandhaa showed great tenacity to keep the match close. In the fourth game, Praggnanandhaa fell victim to a mouse slip that left his queen en prise on the c2 square.

This costly blunder widened the gap to two points yet again, and with the bullet portion looming, where Yoo would be considered the favorite, Praggnanandhaa professionally chose immediate aggression as his best course of action in order to salvage the match.

Yoo was effectively shut out of the rest of the 3+1 section, with Praggnanandhaa playing his best chess to win three and draw four games to finish with a one-point lead.

The timely turnaround and resilience were characteristic of a future champion and such toughness has become a defining quality of World Champion Magnus Carlsen, who most famously fought back from adversity in his 2016 world championship match.

Tension rose dramatically during the break before the bullet portion. The realization dawned on viewers that with the higher-rated bullet player trailing by a small margin, the match was likely to have an explosive end. Pre-match predictions had only 2% separating the pair, with Yoo the favored player due to his bullet virtuosity.

Praggnanandhaa struck first in a wild game where precision was near-impossible with such little time on the clock. This marked the first time in the match that the Indian superstar had managed to gain a lead of more than one point.

After this victory, Yoo decided that enough was enough and began to quicken the pace, winning two games on the fly and immediately vacuuming up his opponent’s lead.

There were still a few hiccups left for the American GM, courtesy of some clinical bullet strategy from Praggnanandhaa.

A hat trick of wins for Yoo at the tail end of the match was decisive in the end, with the pre-match predictions coming scarily close to a perfect prophecy.

The nail in the coffin for Praggnanandhaa came with only seconds left on the match clock. Needing one point to tie the match, and with a promising position, Praggnanandhaa was poised to take things into overtime.

A loose pre-move ensued, however, leading to the loss of a piece, and consequently the game. With too little time left to mount yet another comeback, Praggnanandhaa was forced to lay down his sword.

oo mentioned in the post-match interview that many moments in the match could’ve gone either way, citing that his success in part was due to his match strategy, centered around the idea that “Pragg plays everything, so I thought I would play everything as well.”

Yoo will progress to the quarterfinals, where he will face the winner of tomorrow’s match between Ghosh and Sarin. 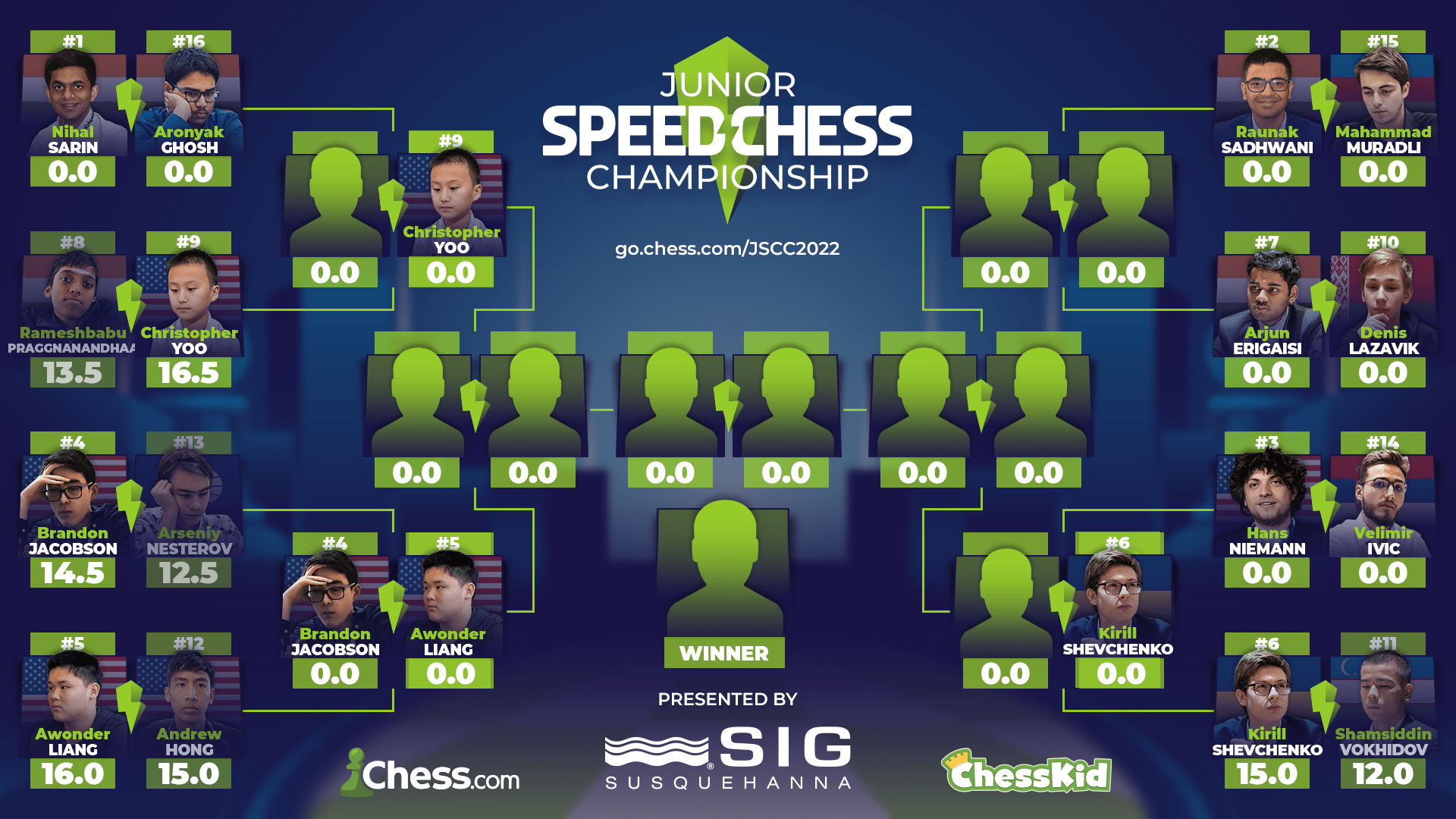